THE GHOST OF ‘DENATIONALISATION’


The recent vituperative comments made by certain writers and ‘freedom-fighters’, reported in the press in the context of the demand for state support for English as Medium of Instruction (MoI) forces us to search for a deeper understanding of the issue of language politics. Given that the problem identified by such statements is about doing something that is antithetical to the national ways of life, one need to ask how we have reached this moment. One of the ways that we can understand the issue is by focusing on the operation of Indian nationalism in Goa.

Reference to T. B. Cunha’s pamphlet Denationalisation of Goans, (1944) is critical to the task at hand as many of these offensive comments either make a direct reference to Cunha and/or base their arguments on his ‘denationalisation’ thesis. Cunha wrote this pamphlet at a time when Indian nationalism was growing powerfully and anti-imperialist nationalist movements were emerging around the globe. While it is clear that Cunha went hammer and tongs against the propaganda of the Portuguese state, one would also be struck with the contradictory nature of his ideological claims. Cunha’s basic thesis was that Portuguese colonialism had “enslaved” the Goan – particularly the monolithically constructed Goan Catholic, thus preventing a national feeling or pride from emerging in their hearts. According to Cunha, a long history of the Portuguese presence in Goa and a long and complex history of Christianization had produced a Goan “essentially [of] a slavish character”, who was happy to ape Western manners and customs on his own volition. 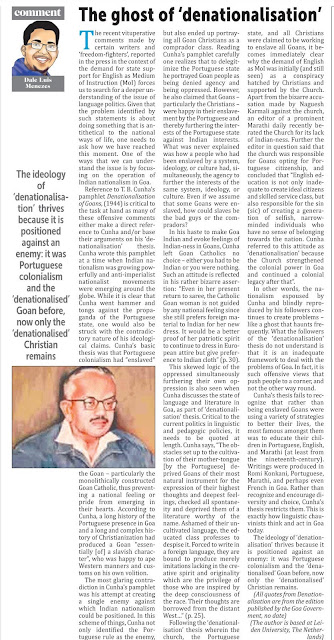 The most glaring contradiction in Cunha’s pamphlet was his attempt at creating a single enemy against which Indian nationalism could be positioned. In this scheme of things, Cunha not only identified the Portuguese rule as the enemy, but also ended up portraying all Goan Christians as a comprador class. Reading Cunha’s pamphlet carefully one realizes that to delegitimize the Portuguese state he portrayed Goan people as being denied agency and being oppressed. However, he also claimed that Goans – particularly the Christians – were happy in their enslavement by the Portuguese and thereby furthering the interests of the Portuguese state against Indian interests. What was never explained was how a people who had been enslaved by a system, ideology, or culture had, simultaneously, the agency to further the interests of the same system, ideology, or culture. Even if we assume that some Goans were enslaved, how could slaves be the bad guys or the compradors?

In his haste to make Goa Indian and evoke feelings of Indian-ness in Goans, Cunha left Goan Catholics no choice – either you had to be Indian or you were nothing. Such an attitude is reflected in his rather bizarre assertion: “Even in her present return to saree, the Catholic Goan woman is not guided by any national feeling since she still prefers foreign material to Indian for her new dress. It would be a better proof of her patriotic spirit to continue to dress in European attire but give preference to Indian cloth” (p. 30).

This skewed logic of the oppressed simultaneously furthering their own oppression is also seen when Cunha discusses the state of language and literature in Goa, as part of ‘denationalisation’ thesis. Critical to the current politics in linguistic and pedagogic policies, it needs to be quoted at length. Cunha says, “The obstacles set up to the cultivation of their mother-tongue [by the Portuguese] deprived Goans of their most natural instrument for the expression of their highest thoughts and deepest feelings, checked all spontaneity and deprived them of a literature worthy of the name. Ashamed of their uncultivated language, the educated class professes to despise it. Forced to write in a foreign language, they are bound to produce merely imitations lacking in the creative spirit and originality which are the privilege of those who are inspired by the deep consciousness of the race. Their thoughts are borrowed from the distant West…” (p. 25).

Following the ‘denationalisation’ thesis wherein the church, the Portuguese state, and all Christians were claimed to be working to enslave all Goans, it becomes immediately clear why the demand of English as MoI was initially (and still seen) as a conspiracy hatched by Christians and supported by the Church. Apart from the bizarre accusation made by Naguesh Karmali against the church, Raju Nayak, the editor of a prominent Marathi daily recently berated the Church for its lack of Indian-ness. Further the editor in question said that the church was responsible for Goans opting for Portuguese citizenship, and concluded that “English education is not only inadequate to create ideal citizens and skilled service class, but also responsible for the sin (sic) of creating a generation of selfish, narrow-minded individuals who have no sense of belonging towards the nation. Cunha referred to this attitude as ‘denationalisation’ because the Church strengthened the colonial power in Goa and continued a colonial legacy after that”.

In other words, the nationalism espoused by Cunha and blindly reproduced by his followers continues to create problems – like a ghost that haunts frequently. What the followers of the ‘denationalisation’ thesis do not understand is that it is an inadequate framework to deal with the problems of Goa. In fact, it is such offensive views that push people to a corner, and not the other way round.

Cunha’s thesis fails to recognize that rather than being enslaved Goans were using a variety of strategies to better their lives, the most famous amongst them was to educate their children in Portuguese, English, and Marathi (at least from the nineteenth-century). Writings were produced in Romi Konkani, Portuguese, Marathi, and perhaps even French in Goa. Rather than recognize and encourage diversity and choice, Cunha’s thesis restricts them. This is exactly how linguistic chauvinists think and act in Goa today.

(All quotes from Denationalisation are from the edition published by the Goa Government, no date)

(A slightly modified version was first published in O Heraldo, dt: 20 January, 2016)
Posted by Dale Luis Menezes at 4:42 AM